Crown celebrates 25 years of manufacturing in Roding, near Munich
Logistic managers around the world rely on Crown, one of the world’s largest manufacturers of forklift trucks. Founded in the USA in 1945, the company offers a full range of lift trucks with technology that increases the efficiency and productivity of lift truck fleets. For the past 25 years Crown has been manufacturing lift trucks for the European and worldwide market in the Bavarian town of Roding in southern Germany. The site is now one of the family-owned company’s key manufacturing facilities.

The parallels between Roding and the town where Crown’s global head office is located – New Bremen, Ohio, USA – may well have influenced the company’s decision to choose this location in Lower Bavaria as the site for its European manufacturing plant. While both towns are rural in feel, they both have thriving commercial and industrial infrastructures. “Yes, Roding is at the heart of Europe, but that’s not the only reason why we chose this location. The key deciding factor was the ready availability of a highly qualified, highly motivated local workforce – and that still holds true today,” explains Ken Dufford, Vice President Europe at Crown.

25 years of development and manufacturing expertise
Engineering has always been one of Germany’s great strengths. The high quality of German products has earned international respect. And within Germany, Bavaria is well known for its twin traditions of craftsmanship and educational excellence. From the very start, the region’s highly qualified, highly skilled workforce represented a key benefit for Crown as an employer. Skilled employees help to ensure that the company’s durable, reliable products are manufactured to a consistently high standard. The company also places a high priority on training the young engineers of the future. Crown trains more than 40 apprentices every year in Roding alone, and most of them are offered permanent jobs upon completion of their apprenticeships. “Our employees in Roding have always been highly motivated and loyal self-starters,” asserts Mads Andreasen, plant manager at Roding. “It’s simple: they’re aware that Crown, as a family-owned company, has a long-term commitment to its employees. They also appreciate the fact that Crown invests in their future by offering additional education and training.” In fact, the majority of the employees who worked in the original workforce back in 1986 still work for Crown in Roding today.

As the new millennium dawned, the plant reached an important milestone. Crown’s senior management team made the strategic decision to concentrate the company’s entire European lift truck manufacturing operations in Roding. As part of this strategic shift, Roding started to manufacture larger and more complex products such as the award-winning ESR Series of reach trucks. As the complexity of products and the demand for customised trucks have continued to grow, the plants manufacturing depth has also increased. In 2002 Crown extended the production facility and to this day continues to invest in the latest manufacturing technology.

A production plant that sets a shining example
Crown is unique in the way the company is dedicated to vertically integrated manufacturing processes. This gives Crown full control of quality and sustainability of its products as well as the flexibility to meet individual customers’ demands. Over the years Roding has fully adopted this Crown philosophy to become a truly vertically integrated manufacturing operation. The sheer scope of the production line and processes at Roding is impressive. From tons of steel delivered every day to CAD/CAM production of parts such as one-piece forks to the production of hydraulic components through to final assembly. The plant also manufactures its own machine tools and in Crown lift trucks you will even find motors built by Crown for Crown. Roding has repeatedly played a pioneering role among Crown’s factories and was the first manufacturing operation of Crown that implemented powder painting in the early 90”s. As another example, training is a key focus as the next generation of Crown engineers is brought online. “The dual education system in Germany is unique, and now Crown’s head office in New Bremen is expressing an interest in our training programme – they’re planning to export a similar model to the ’States,” enthuses Mads Andreasen.

The future looks good for Roding
Thanks to the steady growth of Crown’s international business, the Roding plant has continued to grow. Over the past 25 years the product range has increased and the production area has expanded to its current dimensions of 15,000 m2 (over 160,000 sq ft). “Business contracted during the financial crisis, but now we’re back at pre-2008 production levels,” comments Ken Dufford. “What makes Roding special is the consistently high quality of its products, as well as its flexibility in responding to specific customer requirements. That’s what helped us weather the crisis. So we’re looking forward to the future with optimism, in the conviction that the plant will continue to grow.”

Products made in Roding – an overview 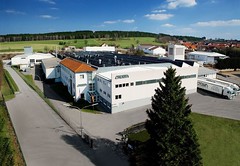 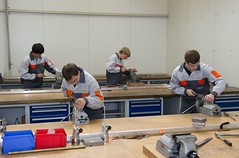