Crown triumphs for the second year in succession

For the second year running, Crown Lift Trucks have scooped a major prize at the annual Fork Lift Truck Association Awards for Excellence (FLTA). The company took the ‘Ergonomics’ award, one of the four prestigious product categories, with its new RC 5500 Series of counterbalance trucks.

It wasn’t plain sailing and the results were close. Crown had to fight off stiff competition from Komatsu, Linde, STILL and Toyota to claim the prize – known worldwide in the materials handling industry as the ‘Archie’.

The RC 5500 was a worthy winner. The most versatile counterbalance on the market today, it can be used throughout the workplace, from unloading trailers and transportation both outside and in, to stacking and storage.

The FlexRide™ suspension reduces shock and vibration by up to three times, making the truck a smooth ride over the roughest surface. Contoured back rests, hip pads and foot rests add to operator comfort – and productivity.

Travelling power unit first maximises visibility, as does the placement of pillars, mast and overhead guard. Access 1 2 3™ Comprehensive System Control, the Intrinsic Stability System and the new intelligent e-GEN™ Braking System also help make the RC 5500 the world’s leading counterbalance. It is a highly productive stand-up series which allows for easy driver entry and exit especially designed for applications where the operator is required to constantly be on and off the truck.

The Awards ceremony itself, held at the Hilton Birmingham Metropole in February, was hosted by FLTA Chairman John Chappell and Vice-Chairman Martyn Fletcher, whose entry to the stage followed a rousing musical opening by Elvis impersonator JD Memphis. A fine band, Vegas, kept the audience dancing until midnight, delivering a highly polished mix of musical styles.  Finally – and back by popular demand – versatile songstress Amanda treated guests to a powerful performance.  FLTA Awards regulars observed that they had never seen the dance floor so full for so long.

‘Awards 2008 has been another resounding success,’ said FLTA Chief Executive David Ellison. ‘We hope that by shining the spotlight on all that is best in materials handling we will have helped to encourage continued improvement in standards. Importantly, the Awards help ensure that truck users get to know that these developments are being made.’

The four major Awards decided by an open vote within the materials handling community were Environment, Ergonomics, Safety and Innovation (won by Crown in 2007 for the TSP 6000 turret order picker).

Crown UK’s Managing Director, Simon Emery picked up the Ergonomics Award on behalf of the company. ‘It is recognition of all the work done by the backroom staff, especially designers and engineers, to produce a truck that is truly versatile and highly operator friendly,’ he said. ‘If the operator is happy and comfortable then productivity is increased – and that is good news for everyone.’ 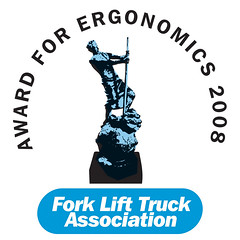 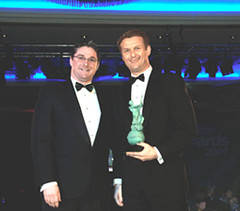 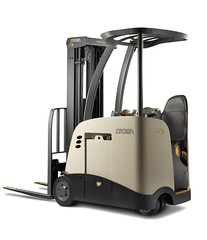